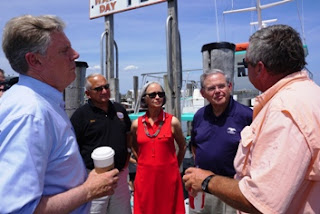 Rep. Frank Pallone and Sen. Bob Menendez make the rounds in Atlantic Highlands talking with recreational fishermen, while back in DC their fellow congressmen are tackling fisheries reform.

Read the rest of the article in The Fisherman Magazine.
Posted by Alaska Charter Association at 10:23 AM